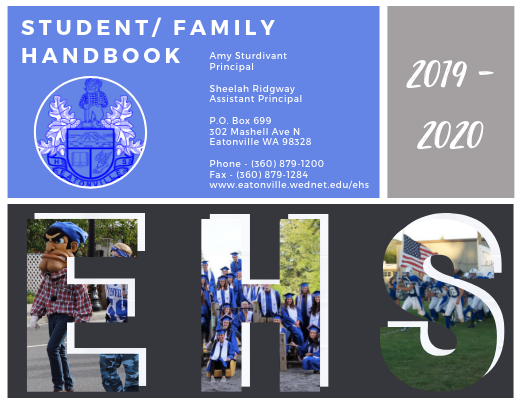 Eatonville School District #404 does not discriminate in any programs or activities on the basis of sex, race, creed, religion, color, national origin, age, veteran or military status, sexual orientation, gender expression or identity, disability, or the use of a trained dog guide or service animal and provides equal access to the Boy Scouts and other designated youth groups. This holds true for all district employment and opportunities. The following employee has been designated to handle questions and complaints of alleged discrimination: Title IX/Chapter 28A.640 RCW Officer: Cristin Blaskowitz, and Section 504/ADA Coordinator: Cristin Blaskowitz, Special Services, 200 Lynch St. W., Eatonville, WA 98328 (360) 879-1800.

It is the objective of the Eatonville High School discipline policy that our students will take responsibility for their behavior by following directions and treating others with kindness and respect so they become persons that value productive work, good citizenship and good character. When students demonstrate inappropriate behaviors it is the goal of the discipline policy that students will acknowledge and take ownership of their choices and decisions, self-evaluate, and make a plan for improving their behaviors.

If a student is referred to the office, progressive disciplinary consequences will result, unless the student is mistakenly accused. School administrators will make the final decisions upon the severity, nature, and duration of the consequences. Those who are repeat offenders may expect progressively more severe consequences for their actions.

School board policy 3240P sets forth rights and conduct expectations for students, along with the sanctions that may be imposed for violations of such expectations.  At all times, this procedure will be consistent with federal statutes and regulations, state statutes, common law, and rules promulgated by the Washington Office of the Superintendent of Public Instruction.   Certain misconduct is a violation of rules so serious in nature and/or so disruptive as to warrant an in-school suspension, immediate short-term or long-term suspension, or expulsion. Refer to Eatonville School District Procedure 3241P for sanctions.  See Eatonville School District website for both school board policies in their entirety.

"Disruption of the educational process" means the interruption of classwork, the creation of disorder, or the invasion of the rights of a student or group of students.

“Suspension” means the denial of attendance in response to a behavioral violation from any subject or class, or from any full schedule of subjects or classes, but not including classroom exclusions, expulsions, or emergency expulsions. Suspension may also include denial of admission to or entry upon, real and personal property that is owned, leased, rented,or controlled by the district.

Unless otherwise required by law, the district strives to keep students in school learning in a safe and appropriate environment. However, there are circumstances when the district may determine that in-school or short-term suspension is appropriate. In accordance with the other parameters of this policy, these circumstances may include the following types of student behaviors:

Unless otherwise required by law, the district strives to keep students in school learning in a safe and appropriate environment. However, there are circumstances when the district may determine that long-term suspension or expulsion is appropriate. In accordance with the other parameters of this policy, these circumstances may include the following types of student behaviors:

For purposes of school discipline, ”arson” means any intentional or reckless setting of a fire or other burning of personal or public property. “Reckless” means that the student understood, but acted with disregard for the exceptional misconduct the consequences of his or her conduct.

For purposes of school discipline, ”assault” means actual hitting, striking or other wrongful physical contact either directly or indirectly and involves injury to another, bodily fluids, or an object. For verbal threats, see Harassment, Intimidation, and Bullying.

It is expected that a student must always first retreat from any threat of harm and/or contact an adult staff member for assistance before engaging in any type of physical response to an assault. However, an administrator may decide not to subject a student to discipline if, following a reasonable investigation, the administrator determines that all of the following are true:

For school discipline purposes, means the unauthorized, intentional damage to district property or the property of others (other than arson, above) Under RCW28a.635.060 (1), the school district may withhold the grades, diploma, and transcripts of a pupil responsible for intentional damage or loss to the property of the district, a contractor of the district, an employee, or another student until the pupil or the pupil’s parent or guardian has paid for the damages. If a student has been suspended or expelled, the student may not be readmitted until the student or parents or legal guardian has made payment in full, or until the superintendent directs otherwise. If the property damaged is a school bus owned and operated by the district, a student suspended for the damage may not be permitted to enter or ride any school bus until the student or parent or legal guardian has made payment in full or until directed otherwise by the superintendent.

Fighting includes aggressive horseplay, instigating, promoting, or escalating a fight, as well as failure to disperse. Engaging in any form of fighting where blows are exchanged is prohibited, regardless of who initiated the fight. This prohibition includes hitting, slapping, pulling hair, biting, kicking, and scratching or any other acts in which a student intentionally inflicts or attempts to inflict injury on another.

Gang imagery and symbols include, but are not limited to:

Eatonville School District strives to provide students with optimal conditions for learning by maintaining a school environment where everyone is treated with respect and no one is physically or emotionally harmed.

In order to ensure respect and prevent harm, it is a violation of district policy for a student to be harassed, intimidated, or bullied by others in the school community, at school sponsored events, or when such actions create a substantial disruption to the educational process. Student(s) will not be harassed because of their race, color, religion, ancestry, national origin, gender, sexual orientation, including gender expression or identity, mental or physical disability, or other distinguishing characteristics.

Conduct that is “substantially interfering with a student’s education” will be determined by considering a targeted student’s grades, attendance, demeanor, interaction with peers, participation in activities, and other indicators.

Conduct that may rise to the level of harassment, intimidation and bullying may take many forms, including, but not limited to: slurs, rumors, jokes, innuendoes, demeaning comments, drawings, cartoons, pranks, ostracism, physical attacks or threats, gestures, or acts relating to an individual or group whether electronic, written, oral, or physically transmitted messages or images. There is no requirement that the targeted student actually possess the characteristic that is the basis for the harassment, intimidation or bullying.

Disciplinary action for students guilty of sexual harassment will be dependent upon, but not limited to, the student's attitude, intent, the effect on other students, and/or staff, mitigating circumstances, and the student's disciplinary history. Based on these factors, discipline may be imposed, up and including suspension or expulsion. Law enforcement may be contacted.

Incident Reporting Forms may be used by students, families, or staff to report incidents of harassment, intimidation or bullying. Forms can be found on the district website at www.eatonville.wednet.edu.

In the Eatonville School District we do not tolerate bullying or harassment of any kind.  By law, incidents of harassment, intimidation or bullying which are reported to school or district staff require an investigation. Parents often want to know the outcome of these investigations and express their feelings on social media. These postings on social media often state that the ESD “doesn’t do anything.” According to The Federal Education Rights Privacy Act (FERPA, a federal privacy law) parents have certain protections with regard to their children’s education records. This means that district personnel cannot divulge information about students and what occurs with discipline.

We ask that you are careful with social media and remember that you are reading a one-sided view. There is always the other side of the story, the side not seen because, as employees of the ESD, we do not respond to comments on social media. Administration cannot share how situations are handled. If you see something on social media that causes concern, please contact your child’s school.

Please understand that kids can be mean. Not all mean behavior is bullying. Bullying is defined as aggressive behavior that is repetitive and exhibits an imbalance of power. Again, we do not tolerate bullying or harassment and encourage students who are victims to report. Bystanders are also encouraged to report. There are systems in place in every school to report bullying and harassment. In addition, the Eatonville School District website has a reporting form under “Families.”  Reporting can be anonymous. Here is the direct link: https://eatonville-wa.safeschoolsalert.com/

The purporting to possess, possession, consumption, use, storage, sale, or distribution of drugs, alcohol, and other similar chemical substances on school grounds, at school activities, or on district-provided transportation is prohibited. For purposes of student conduct expectations:

For school discipline purposes, “theft or stealing” means the possession of another person's or district property, regardless of value, without the person's permission with the intent to deprive the owner of such property. As part of the sanction, restitution will usually be required.

This section addresses the possession or use of actual weapons in violation of Eatonville School District policy 4210 or RCWs 9.41.280 and 28A.600.420, including firearms, dangerous weapons, and other items listed within that policy. This may include but is not limited to when a student acts with malice as defined under RCW 9A.04.110 and displays a device that appears to be a firearm. Objects and conduct that fall outside of that policy and laws should be addressed under other sections, as appropriate.

Any student who is determined to have carried a firearm or to have possessed a firearm on school premises, school-provided transportation, or school sponsored activities at any facility shall be expelled from school for not less than one year (12 months) under RCW 28A.600.420, with notification to parents and law enforcement. The district superintendent or the superintendent’s designee is authorized to modify the expulsion of a student on a case-by-case basis.

The school district may also suspend or expel a student for up to one year if the student acts with malice as defined under RCW 9A.04.110 and displays a device that appears to be a firearm. Expulsion may result based upon the administrator's judgment of the seriousness of the act or circumstances surrounding the act, and/or the previous record of the student.